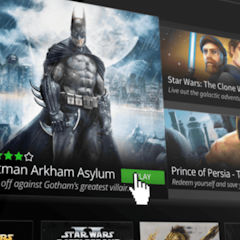 Innovation Origins published an interview with Doki Tops is the founder and director of Utomik. He is speaker at the Low Latency conference, which takes place during the Photonics Applications Week.

Utomik, a platform for games / gaming works just like Netflix. You can watch movies and series on it. Through Utomik you can choose from more than 600 games to play. We asked Tops whether whether his platform could have existed if he weren’t able to use technology based on photonics. His answer was unequivocal: “No.”

“We don’t make photonics products ourselves, but we need them to run games on our platform,” he explains. “The data the games send to players at home is stored in the cloud.” The cloud is a network of computers, servers and fiber optic cables (if your home is not wired with fiber optics) that are connected to antennas linked to consumers’ computers at home.

The data is transmitted via light, traveling from a server via fiber optics or a 4G or 5G antenna to a home address. This communication via light is based on photonics. “But it’s more than that,” says Tops. “The chips powering the computers also use this technology, since they are manufactured using photonics. In addition, the chips use light to communicate.”

“The processing speed of chips has increased tremendously since their invention in the early 1960’s due to the more efficient and precise use of light. According to Moore’s Law, it has roughly doubled every two years,” says Tops. Gordon Moore was one of the founders of chip manufacturer Intel who also predicted the doubling of the speed of chips.

Click here if you want to know more about the Low Latency Conference during which Sebastian will talk about Fiber optics powers high-speed home gaming, which takes place during the Photonics Applications Week.