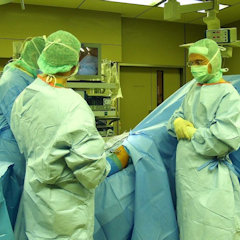 a Breaktrough in Photonics. An interview with Erik Korsten, anesthesiologist/intensivist at the Catharina Hospital in Eindhoven, the Netherlands, and part-time professor of signal processing at the Eindhoven University of Technology (TU/e).

How the invention of the photonics-based oxygen saturation meter (also known as an oximeter) prevents a patient from dying or becoming paralyzed during surgery due to a lack of oxygen.

The most innovative equipment in healthcare is based on the use of photonics for both diagnosis and treatment of a specific disease. Nowadays doctors can view the internal body with the help of a thin fiberglass thread. All the advanced endoscopy equipment of the past twenty years has been based on photonics, according to Anna Nikiel, the vice president of Technobis, a group that designs medical equipment, among other things.

“During an operation, you want to know if the patient has enough oxygen in their body. If they don’t have enough, you need to add oxygen. Otherwise, they will die, or wake up half paralyzed. And of course, that’s not what you want; not as patient, not as a a physician. I’ve seen a patient’s hands put up on the screen. If their hands turned blue because the patient wasn’t getting enough oxygen, it was very easy to see.”

But things still sometimes went wrong, Korsten notes. “For instance, there may have not been enough oxygen in the tank. Nowadays we have oxygen pipelines. So we no longer have that problem.”

Click here if you want to know more about the Healthcare and Photonics Workshop during which Erik and others will talk about healthcare applications with photonics, which takes place during the Photonics Applications Week.