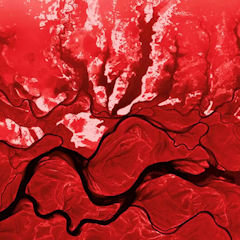 Everybody thinks that Lidar is only applicable for cars. Esri UK, a mapping and spatial analytics company, created maps of rivers around the world from detailed elevation data collected using remote sensing techniques. The information was taken from Esri’s Living Atlas, one of the world’s largest collections of geographic information.

By eliminating any vegetation or infrastructure, the maps show each river’s geomorphology as it would appear on bare ground. Elevation data can be valuable in highlighting river features and landforms that cannot be seen from normal satellite images, such as slight changes in elevation, run-off, levees, sediment deposits and how the land has changed over time.

One common method in collecting elevation data of this kind is to use a laser scan known as lidar, which measures distance by firing a laser at the ground, most often from a plane, to create a highly detailed picture of the elevation of the earth. Satellite-based sensing is also used for capturing similar data across large areas. This technology is used in various industries including agriculture, conservation, water management and soil science.

Read more and play with the interactive maps here.